Clearing a back falling waste pipe

We recently completed a particularly difficult drainage job with a number of complications that meant other companies, including a specialist drainage company, had tried and failed to clear. The issues included a back falling pipe, the blockage being on the first floor in the middle of the house and the difficulty of access to get the drainage van close to the house.

We would estimate that the blockage had probably been building up for a number of years but it only became apparent when the toilet and the bath failed to drain away and then started backing up. After getting a couple of contractors out who were not able to resolve it, and with half a bath tub of raw sewage and a toilet unable to flush (see below), you can imagine how desperate the owner of the property was by the time we came out to it. 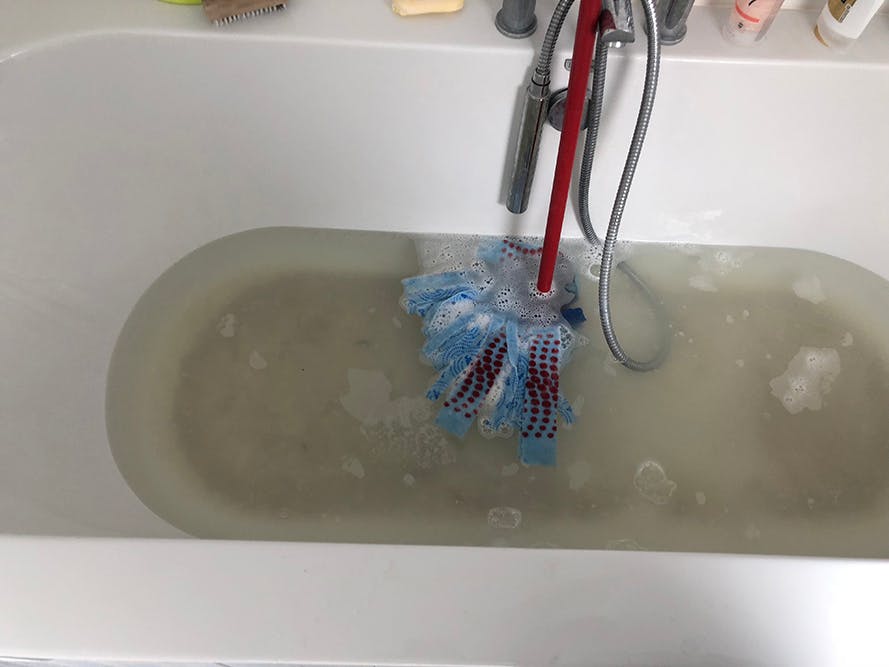 We were able to diagnose the issue using a CCTV camera which we sent through the pipe to conduct a thorough survey (see below). The main cause of the problem was that the waste pipe which ran in the joists under the first floor was back falling (effectively attempting to flow uphill). This meant that the waste water was not able to drain away properly and some of this water was therefore left sitting in the pipe all the time. The uric acid in the water then caused lime scale to build up in the pipe. Unfortunately this blockage was located on the first floor in the middle of the house making it difficult to access and in a pipe that ran 2 metres vertical then 3 metres horizontal. You can see the build up of lime scale in the images on the CCTV monitor here: 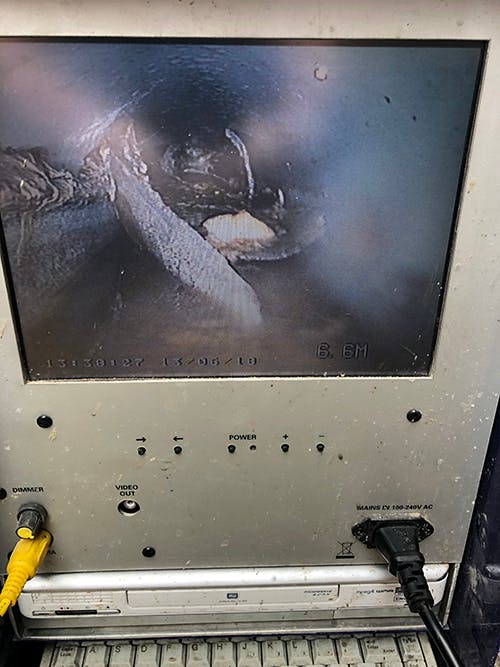 Luckily we maintain our high pressure water jetting machine well and it had only recently been fully serviced. This meant that it was operating at maximum pressure and, with some delicate manoeuvring using the camera for guidance, we were able to clear the blockage, remove the scale and get the water flowing properly again, much to the relief of the customer!

However, that’s not the end of the story. While the current blockage has been dealt with, the cause (the back falling pipe) remains in place and it will eventually happen again. Luckily that is something that we can deal with and we will be going back to replace it with something that is fit for purpose.

Claire, the customer, posted this review on Google:

“From the moment my insurance claim was logged, Plumbcare took over promptly, efficiently and professionally. The office staff were friendly and refreshing, and we immediately had complete faith in the company. The job required was not easy, and another firm had tried to resolve it but had failed, so when Kristian and Paul landed, they had their work cut out. They didn't fail to impress. Both so competent and they stayed until the job was done, and even cleaned up! Very impressed. We intend to use them for a future refurb job. First class. Thanks guys.”

Claire was so impressed with our drainage services that she has asked us to quote for a new wet room installing as well!

If you are worried about a blocked drain or water in the house that doesn’t seem to be draining away properly, contact us about a drainage survey on 0333 577 0151 or send us a message.

Thank you for rapid completion

Plumbcare Yorkshire Ltd is an introducer appointed representative of Phoenix Financial Consultants Limited (“Phoenix”). Phoenix is a credit broker that is authorised and regulated by the Financial Conduct Authority (Financial Services Register no. 539195) which oﬀers ﬁnance for home improvement projects from its panel of lenders. All ﬁnance is subject to status and credit check.